After about 10 years of use I decided it was time to buy a new computer desk. The one I’d been using was an old second hand one of high quality, black inset leather, five draws, real wood type thing. At the weekend I spotted a walnut model with a sliding keyboard draw and a tinted glass inlaid top. Very attractive in looks and price.

So I bought it and five nights later finally got around to assembling it and replacing the old one. While the glass is new (it looks all lovely and reflective, but at the same time reminds me of the windscreen of some chav with his ice filled, twin exhausted, alloy wheeled 206) I decided to take some photos.

The first attempts included the opened out keyboard tray and tight crops of keyboard and mouse with reflected screen in the background. Then I spotted some old mirror glasses that had come out of the back of one of the draws from the old desk. I have a pile of stuff to redistribute as my new desk doesn’t have draws so you might see photos of other bits and bobs soon.

I positioned the glasses at a decent angle so the camera was in one corner and took a few shots. I then thought it would be good to include myself in shot so I went to my ePHOTOzine profile and had that as background, and positioned myself so i was large in the glasses reflection.

And here’s the result. All good fun! 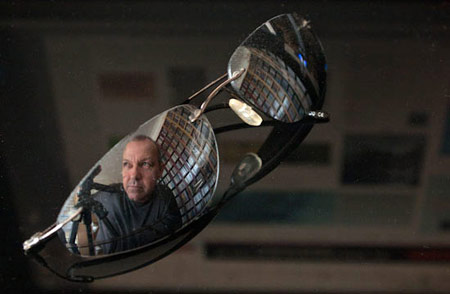