I’ve had the gas mask for ages now. I bought it for model shoots, but I hadn’t realised they were dangerous due to asbestos content. So it’s been in a bag in the garage. I also bought a smoke machine over two years ago, also with the intention of doing atmospheric model shoots. So today I decided to make use of both and try and create an atmospheric still-life.

I like the results but I failed to get the smoky atmosphere. I laid the mask on the garage’s concrete floor and shot from above. I placed the smoke machine just behind the head of the mask. The camera was set to auto and the garage light turned off. I then used a Gorilla Torch to paint light on the mask as the camera recorded the exposure. It took a few shots to get the right effect, but no matter what I did I couldn’t get the smoke looking effective around and above the mask. 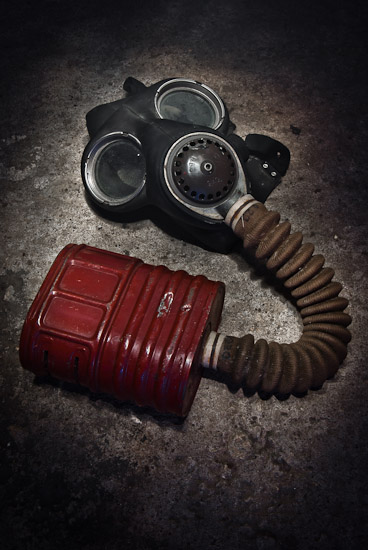 I even tried using the torch at a low angle to try and get rays of light but the shot just lacked contrast.

I won’t be beaten. I have another idea but for now here’s my first attempt.