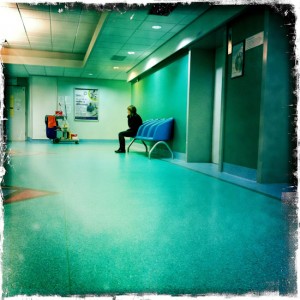 A trip to the hospital today to have an EMG / Nerve Conduction test and I have to say it hurt! Quick fire electric shocks up the arm like putting your fingers in a plug socket over and over again. We’ll not quite as powerful, but I certainly felt it. Must have been 50 or so shocks.

Also on the subject of numbers I was intrigued to hear on the radio today that there are an estimated two million potholes on the roads at the moment that need fixing. Who counted them?!

And today when testing flash I needed to position a head 2 meters away from the wall and guestimated the distance before measuring accurately and I was surprised I got it bang on. Who says men always incorrectly estimate when giving measurements?!

Back to the point of the thread…my picture of the day.
It’s from the Sheffield Royal Hallamshire Hospital. This is the area where you catch the lift, and is now used as a waiting room.

It’s doesn’t feel right waiting in the lift area, but was certainly less crowded than a typical waiting room. It’s twice the width of this. The woman was on the phone…good news I wonder? I hope mine is when the test come back.

Taken with my iphone and the hipstamatic app.