This was taken on a coastal walk to Bedruthan Steps (29 August 2011). I went over to photograph the sunset but hadn’t done my research and the tide was fully in so I couldn’t get on to the beach. It’s at a spot on the way back to Mawgan Porth. I won’t take full credit for this one, my lad influenced the shot. I’d taken some photos of the wall and separate ones of the sunset and he’d been watching and said why don’t you take a shot from an angle and include the sunset. I could have kicked myself for missing an obvious opportunity.

It was taken with the Olympus Pen EP-2 and is a 5 frame HDR merged in Photomatix. 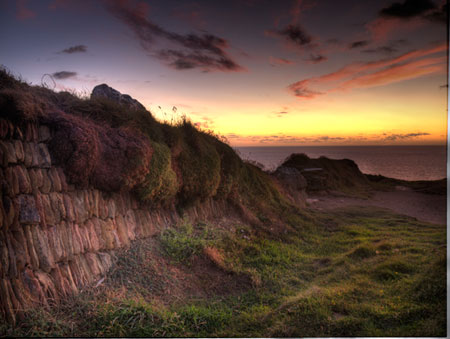