Stanage Edge this evening. I went to shoot the sunset and then star trails, the sunset was a bit lack lustre but the stars were out. I spent about an hour in the dark on the edge – it was, as seems usual up there, very windy. I heard sheep rustling around, bats (i think) flew over head, but nothing as scary as the other night in Clumber Park, so I was quite relaxed as I tripped the shutter after each 30 second exposure.

In one shot I’d set the tripod up from a low position and started taking shots. I then climbed up onto the rock that two of the tripod legs were resting on only to realise the tripod was leaning backwards and could have easily toppled over and crashed down 20 or so feet. The fun of in the dark photography!

The battery died and I didn’t have a spare with me, so the trail on this one is quite short. In the background to the right are the lights of Sheffield. 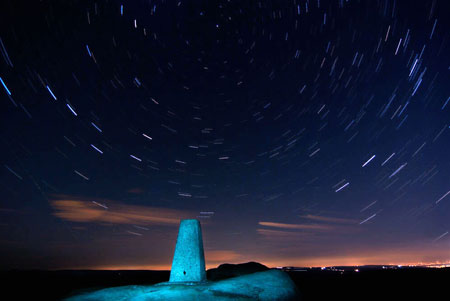 It’s a 28 exposure blend, with one frame illuminating the trig pojnt with the Joby GorillaTorch

It was quite a challenge getting down after I’d finished. What seemed like an easy way up disappeared after dark.
The Joby GorillaTorch came in handy again.