Day two of the stream of errors (see yesterday’s blog – Photo365 -Pen-y-ghent for scene setting)
The bed in the B&B was a four poster, which sounded great but it was quite small (I couldn’t lay straight as my feet pressed against the foot)…and the room, while being quaint, was tiny so the bed was against the wall and the covers trapped in I felt like a sardine.
Got up had cooked breakfast…brilliant quality and maybe things were going to go better today. Or maybe not!
The iPhone battery was almost flat and I hadn’t taken a charger. The Olympus Pen EP2 which had full power yesterday was totally flat (again no charger), so I just had my Pentax K5 to shoot with.
The polarising filter on the 77mm filter thread lens fell apart and couldn’t be used.
We headed back to Castlerigg. No sooner had we got there the weather started to pick up, but a coach of French students arrived. They spread out all over the stones so there was no clear view. They hung around for ages, and when they went the weather had gone dismal. I managed to get lots of small clusters but not a decent full ring. And the iphone gave up after just one shot.
Off to Ashness Bridge (weather hit & miss) no sun on the bridge.

Decided to head back home using sat nav but it sent us in wrong direction so we had to do a u-turn 30mins out of way.

Got back in 3 hours 30mins and attempted to download pics off my 8Gb SM card. It’s come up with error so all my K5 shots are currently in limbo. The error also caused my main drive to disappear and it took half an hour to resolve that error.
So today’s picture is the only shot I have from today, taken with the iPhone. I am now going to try and recover all my pictures taken using the K5…lots of HDR of Scalebar Force, Castlerigg and Ashness Bridge.

The shot is of Castlerigg stone circle. It’s my favourite cluster of stones and from the best viewpoint. Weather was rubbish at this point. I took some HDR brackets with the K5 later when the sun hit the stones. 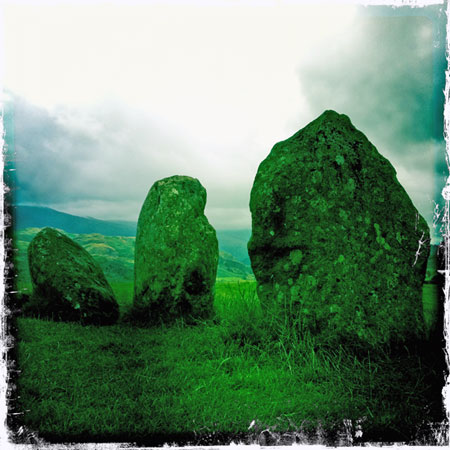