I’m embarrassed to say this is my first ever viewing of a sunrise in Derbyshire.

I was put off many years ago when I cycled from Hillsborough to Fox house to do my first sunrise and there was thick cloud and the light was awful.

I’ve been meaning to set the alarm for the last seven years but laziness and that early bad experience stopped me from doing so.

This morning I woke up at 5am with acute back pain. (I’d been lifting really heavy concrete slabs at the weekend and the strain’s caught up with me)

I looked out of the window, saw stars and thought:

So I quickly packed the camera bag and headed off to Stanage and arrived at about 6:15. I packed a torch but to my surprise I didn’t need it.

The sun came up over the horizon about an hour later, but it was behind cloud, and did clear up as it got higher. I took several shots of the trig point – one uploaded to the gallery, and shots across the edge and views towards Castleton.

And I did the customary millstones. They were shaded by the edge so at this point shadows aren’t too harsh.

I called back later and saw a group of photographers taking turns shooting this scene so I left them to it and headed home. 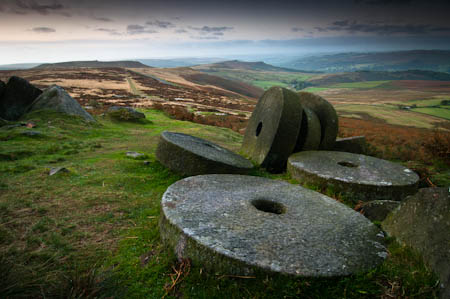