The old Worksop library closed a few months back when the new two story modern one was opened. It cost 8.4m to build and has state of the art features including a self loan & return system, a cafe, an internet area and modern but almost clinical bookshelves.

When it first opened it was regularly packed. Full of noisy kids treating it like a playground, adults taking a look at what all the fuss was about and regulars just wanting to get back to their usual habits after a few months closure, between change over.

Officials apparently hoped it would bring 1000 people a day to the building – it even opens Sunday! It’s the fist in the country to do so. And they did everything to make it interesting. To me it felt wrong hearing kids screaming and shouting. I’ve always found a library a place of calm, noise free and tranquil, but here noise echoed around like a swimming baths.

I went back tonight to see how things were going and take some interior shots to combine with a set I did of the old library a few years ago.

There were no kids, the place seemed like a ghost town, an empty feeling that was nothing like those early days, the calm had returned, but it didn’t feel comfortable. Too much open space and an unlibrary like feel.

I took a few shots and left. As the automatic doors opened I saw the old 1930s library in darkness, a sad looking building, but in one of the windows was a reflection of new. And interestingly in the foreground to the left is a cross.

It became the setting for my photo of the day. 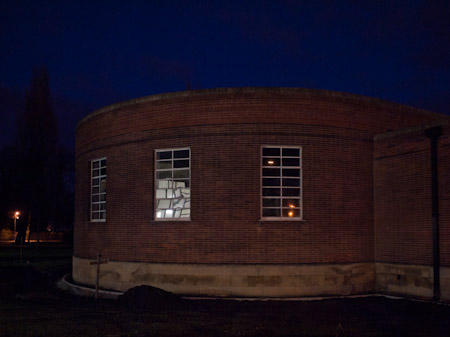